It’s been a long time since then, but for anyone of you who doesn’t know who David Barbeschi is, we’re here to remind you that he is one of the few people whose projects managed to win and get nominated at TMFF in two different editions. In 2016 (October-November edition) David has won the BEST SCREENPLAY award for ‘PAWNS’ and almost a year later, in June 2017, ‘PAWNS‘ (this time the film) came back and got two nominations.

TMFF: Congratulations again for your awesome achievements, David. We’ve noticed they’re not the only ones as both your screenplay and the film have managed to win quite a few more awards in the meantime.

David: Yes, we figured early on that as a marketing strategy it would be more efficient to distribute the script and the film simultaneously, and this approach didn’t disappoint; the project was selected in 20 festivals, garnering wins, nominations and overall international praise. Aside from our success here at TMFF, one of the most important selections, for me, was our nomination at the Southampton International Film Festival, firstly because it’s listed in FilmFreeway’s Top 100 Festivals, but mostly because Tyrees and I created this project while we were both living in Southampton, the crew-members who worked on the film are mostly graduates from Southampton’s own Solent University, so it felt right that we’d have our premiere in the town where we’d first developed the script and later edited the film. 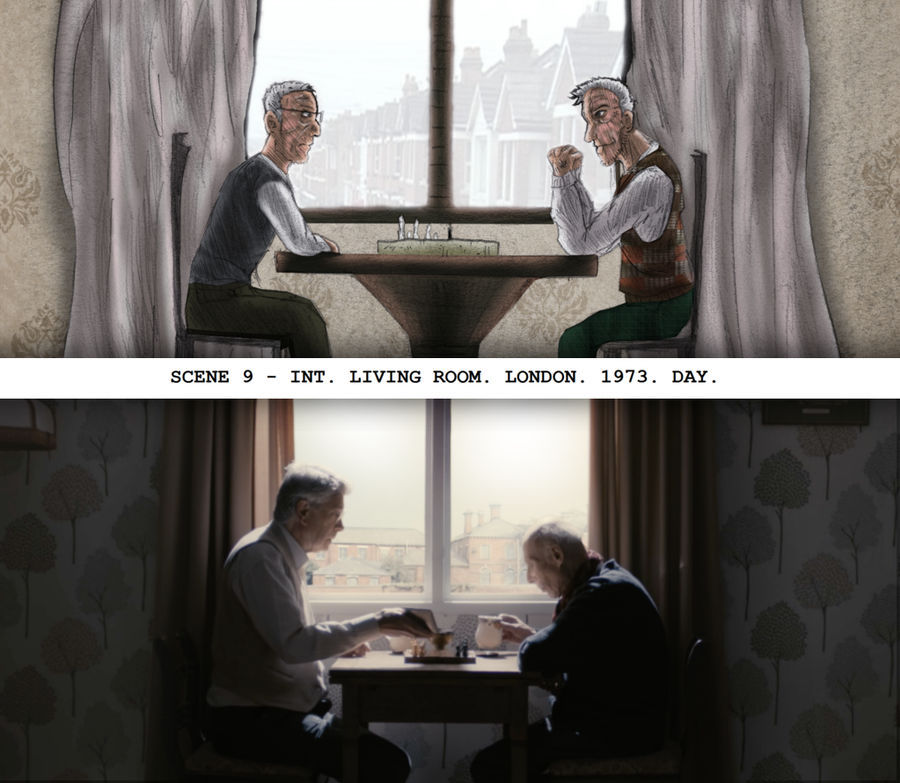 TMFF: How do you feel now that your screenplay has been made into an actual film? What was the process, did you pitch it to Tyrees A. Lamptey (the director) or did he enjoy it so much that he decided to make it no matter what?

David: The most amazing thing for me was seeing the image of the two old veterans playing chess. Those are my favorite scenes, as well as the ones I re-wrote the most, the prologue and epilogues to the story. Due to my attachment to them, I didn’t hesitate to design them by scribbling up some concept art and storyboards. After post-production, seeing these words I wrote, these illustrations I made, this vision come to life, was a perfect representation of what filmmaking is truly about: making stories come alive. As far as the writing process goes, it was actually Tyrees who came to me with a concept that would eventually inspire me to write ‘PAWNS’.

We had previously worked together in similar roles on another project, so anything he’d come to me with would receive an automatic ‘yes’ on my part, because I had previously seen him in action on set, and the man just works miracles as a director.

TMFF: How did you get the idea behind ‘PAWNS’? Is it based on a true story or is the plot entirely fictional?

David: The original concept for ‘PAWNS’, the one Tyrees pitched me, was immensely different from the end result, so much so that the only element the film still has in common with the original idea is the presence of a chessboard. But over the span of a year, we kept developing this notion, changing it, thinking outside the box. The struggle was turning it into  something that any viewer would be able to relate to. For instance, when I finally set it in WW1, about 6 months in, the original theme was about two enemy soldiers whose passion for fighting united them into friendship. We soon realized that this theme would be great in a martial arts film, but not everyone’s a fan of martial arts films. So we went back to the drawing board again and again until we finally settled on what has now become ‘PAWNS’, a story about two enemy soldiers who rediscover their humanity by being trapped in a bunker, a concept inspired to us by the Christmas Truce of 1914.

TMFF: Can you tell us more about the production and post-production stages for ‘PAWNS’ the movie?


David: I took on the role of producer when the film was getting made. While Tyrees was developing the creative aspects with Charlie Kelloway (who I believe was nominated Cinematographer of the Month for his work on ‘PAWNS’, here at TMFF), I’d be rallying cast and crew-members. The most complicated part, honestly, was finding the location/costumes. This was a WW1 short. You either go all in, get an actual trench and make it look good and professional, or you take alternative routes, dig a hole in some random field, try to dissimulate it with a fog machine, and pray nobody notices. That second option was not an acceptable one, to the three of us. Eventually, we came into contact with History in the Making Ltd. These are the same people who provided weapons and costumes, if I’m not mistaken, to the hit series ‘Black Sails’. They met us more than halfway, provided us with costumes and a detailed, historically accurate set for each of the locations we’d need, in exchange for a co-production credit. Production was a very stressful moment, in all honesty, as, at the time, this was the biggest project any of us had ever tackled, but in a display of pure teamwork, everyone, from Hannah, our 1st AD, and Lina, the Sound operator, to James and Julian, the two lead actors. For post-production, we have to thank Erwan, our editor for putting up with Tyrees’ and my unending demands. Solent University was kind enough to provide us with their editing and grading suites to help us.

TMFF: Do you feel that WW1 films should get more attention nowadays? There’s clearly a difference between WW1 and WW2 movies, the latter having benefited from a greater audience and reception in general.

David: That is indeed true. I noticed something strange, in myself and other people. In a casual conversation, you start saying World War, and you end up saying “2” automatically. Now, sure it happens to everybody, but that goes to show how engrained WW2 is in us as an audience. The reason why Tyrees and I opted to set it in WW1 instead of the following one, is because, to an audience, WW1 allegiances aren’t perceived as black and white as they are in WW2. I think the attention any film receives should depend on its quality. If it were up to me, if the story is good, then it should get the attention it deserves. On a personal level, I am partial to the years prior and shortly after Archduke Ferdinand’s assassination, as the political, military and economical landscapes were all under pressure, and there was a lot of tension in the air, tension which could very effectively be repurposed to serve a film, or a script, (that’s how you get masterpieces like ‘An Inspector Calls’, for instance).’

TMFF: What’s your advice for budding screenwriters who are struggling to get their screenplays on screen? Is it all about networking? Or maybe talent? Or maybe luck?

David: As one of my teachers told me, a writer writes. To improve as a screenwriter, write every day, even if it’s just one paragraph. Gotta cultivate your talent, you don’t wanna get rusty or you’ll get stepped over, and if you get stepped over too many times, you’re just not fit to go on, which is a pity. I’ve met a bunch of screenwriters, studied with some of them, they all say the same thing, and that’s because it’s true. Also, read scripts, download them, ask for favors to get your hands on them, if you can’t find them online, see how others write action so you can write it your own way. Expand, try working on comics, video-games, novels. A writer writes.

To be successful as a screenwriter, I’ve found that networking is what it will always come down to. Meet people, have conversations, find a balance between being interested and interesting. And sure, submit to script competitions, I honestly hope you win, but at the end of the day, most of these competitions will have a prize that involves some degree of networking too, so it all goes back to that in the end.

TMFF: Have you considered directing as well? Or do you want to focus more on screenwriting at this point? Your IMDb page says that you’ve been producing some short films lately. If you were to compare screenwriting with other roles such as producing or directing, which of them would you say are the most enjoyable?

David: I’d rather focus on writing and producing. The two roles come well to me despite their completely opposing nature. I make sure that most of the projects I work on have some sort of commercial value; if I can picture a poster of it, I write the script. I’ve moved to Los Angeles a couple of years ago, to get a Master of Fine Arts degree in Screenwriting at the New York Film Academy. Ever since I’ve graduated, I’ve been working as both a screenwriter, and a producer/production manager/1st AD. Both departments are enjoyable to me because they go hand-in-hand, at the end of the day.

As far as directing goes, I’m not quite there yet. Maybe in a few years, when I’ve gained more experience on set.

TMFF: Any new scripts or films on the horizon? If so, what are they about and when should we expect to see them on paper or on screen?

David:  I’m currently working on 14 different projects. One of them has already been filmed, a short I wrote the screenplay for and produced titled ‘Off-Road’, directed and created by Shubham Sanjay Shevade. The film explores the relationship of an estranged mother and son as they go on a hiking trip that will draw out immense revelations and consequences. This film was developed, pre-produced and shot in about 20 days, it was moviemaking at its purest, a bunch of crew-members telling each other “Hey, let’s just go film something!” ‘Off-Road’ is currently in post-production and will be ready for festival distribution soon.

My first feature script, a sci-fi film titled “White Crow”, featuring an agoraphobic woman who must transport her blind vigilante brother across a dystopian city to fight the city’s overlords. The screenplay is currently going around screenwriting competitions, and has been selected 7 times by festivals such as the WeScreenplay Feature Contest, and even making the finals of the Creative World Awards. I am currently working to turn the script into a graphic novel.

Finally, I’m working with Tyrees A. Lamptey again, this time as a producer only, as we bring to life a film adaptation of a British novel about drugs deals and secret romances. Tyrees has recently finished the script and we have just entered pre-production.

TMFF: Thanks a million for your engaging insights, David! We wish you the best of luck for the future, and why not submitting again to our festival soon.

David: Always a pleasure! Thanks for having me, and I’ll be submitting again fairly soon!