Crowdfunding is all the rage for filmmakers. They will put up their films for crowdfunding and hope that the money will roll in. It might, but there are some tricks that have worked for some films that producers and directors should use. Bear in mind that most films languish looking for crowdfunding dollars.

Have a Built-in Audience 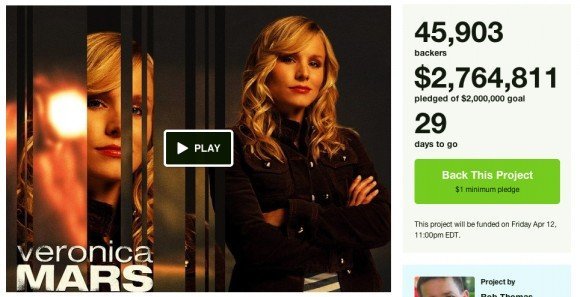 Veronica Mars was a popular TV show in the early 2000s, but not popular enough to stay on TV. In 2013, the cast and crew got together because they wanted to make a movie. They put it up on Kickstarter to get funding. They raised nearly $6 million. The film was released in 2013. It grossed almost $2 million on its opening weekend with a total US gross of about $3.4 million. That’s pretty good and doesn’t include international, DVD, or showing rights.

The built-in audience made this film one of the most successful crowdsourcing campaigns ever. There were already fans of Veronica Mars that wanted more. Resurrecting an old series (but not too old) can be an excellent way to get the press and funding that you want.

Have a Star and a Great Plot

Zach Braff has some fans, but he is far from a household name. The Scrubs star has done well for himself, but he probably can walk down most streets unmolested. On Kickstarter, he was able to raise $3.1 million for his film Wish I Was Here. It’s a film about a man trying to find himself in middle age.

Having a star helps, but in reality, this film was driven by an interesting synopsis, a sincerity on the part of Braff that the film needed to made, and the likelihood that other stars would join in the production. Others did and the film did well. It’s worldwide gross was about break even with its $6 million final budget.

Do Other Things Too

Lazer Team was dreamt up by the creators of Red vs. Blue. They had an idea for a film and went looking to $650,000 to help make it a reality. The ended up getting nearly $2.5 million. Now, there were only 2,188 backers. That means an average donation of over $1,100.  Nonetheless, getting 4 times what you asked for is quite a feat.

Doing smaller projects was a big factor. Anyone who loves Red vs. Blue, Achievement Hunter, or any of the other work that Rooster Teeth does will be willing to put money up for their next project. The moral of this story is to start small. Red vs. Blue was built on short animated episodes and now is alleged to be the longest running sci-fi show in US history.

These are only three examples and three of the highest profile. There have been thousands of films that have been funded by crowdfunding. Have a great vision, a reasonable budget, and pitch your film well and there will be people willing to open their wallets for you.