Christian Slater is an icon. Since he became a sensation in 1989 with the film Heathers, he has represented the angst of his generation in the same way that Nicholson did 20 years earlier.

Slater started his career with a run on Ryan’s Hope, a long-running ABC soap opera. He also spent a few years on Broadway in a large number of productions.

His first film was The Legend of Billie Jean. The film didn’t do nearly as well as expected, but Slater came out of it okay. His next film had him working with Sean Connery, already a screen legend. As Connery’s young student in Umberto Eco’s The Name of the Rose, Slater plays the role of the fresh face of innocence learning from the kindly, but well-scarred, master.

Three more years and several films later, Slater found his niche, the misfit teen, in the film Heathers, opposite Winona Ryder. The film defined the feelings of the generation that was leaving behind the world of Ronald Reagan and entering the world of Bill Clinton. That film, as well as Full Metal Jacket, Pump Up the Volume, and Young guns II made him a favorite of his generation and a counter-culture icon. He is always compared to Nicholson, not only because of his facial expressions and interesting roles, but also because his acting abilities were just as high.

Over next couple of decades, Slater was in some of the largest films made, including Interview with the Vampire, Broken Arrow, and Nymphomaniac. He has also done well on television, appearing on The West Wing and Alias, as well as several animated series and documentaries. 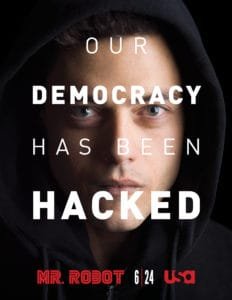 Besides a consistently strong career in film and TV, Slater has also found himself in trouble with the law and addictive substances several times. He even did a short stint in jail for assault. This kept in the public eye, letting his fans see him as man with his own flaws, unlike many of the polished public personae of his contemporaries.

All of this has only made his latest character more believable. Slater plays the title role of Mr. Robot in the USA Network series, now in its second season. Slater’s character recruits Elliot (Rami Malek) into his troop of hackers called “fsociety.” The show is a dark, conspiracy-ridden look at the modern world. Slater consistently commands the screen and has made the series a hit, along with Malek and a cast a gifted actors, by making their conspiracies of government control and spying believable and scary.

For fans who can’t get enough of Slater’s peaked eyebrows and intense speech patterns, Mr. Robot is another in a series a great script choices and acting opportunities for one of the most consistently reliable and gifted actors in Hollywood.

Season 2.0 of Mr. Robot has premiered on July 13 on the USA Network.

Submit your film or screenplay!