‘The Witcher ‘is best associated with the video games, particularly the Witcher 3, which is roundly acknowledged as one of the best games of the past decade. Many people, even fans of the games, may not be aware that the story is derived from the books by Andrzej Sapkowski. You may also not be aware The Witcher stories have been picked up by Netflix for a TV series, with the only confirmed casting so far being Henry Cavill (Superman) as the lead character Geralt.

This isn’t the first film or TV series to be inspired by a video game, but it’s among a select few that span across books and games, as well as tv and film. It’s been wildly successful in the first two, so hopefully this new show will be just as good.

No release date has been announced, but we’ve been hearing good things: the final episode script was completed late September 2018, and Andrzej Sapkowski himself is working on the show as a consultant. In a press release regarding the new show he said “I’m thrilled that Netflix will be doing an adaptation of my stories, staying true to the source material and the themes I have spent over thirty years writing… I’m excited about our efforts together, as well as the team assembled to shepherd these characters to life.” 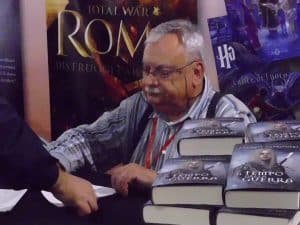 The story follows Geralt of Rivia, who was taken as a young child and exposed to dangerous mutations in order to turn him into a Witcher, which basically means a bad-ass, cat-eyed monster slayer. Witchers carry two swords, one is steel for human threats, the other is silver for monster slaying.

Our gravelly voiced hero lives in a harsh and unjust world full of monsters, wars and desperate and violent people. It’s a dark fantasy world far removed from the Tolkienism of normal fantasy, which for most Western viewers will be a little unfamiliar. In the world of the Witcher, most of what you see in terms of monsters are pulled from Eastern European myth and Polish folklore.

An example is the vampires, they don’t dress like Johnny Depp, or glitter like in a particular franchise I won’t name. There are a number of different types of vampire but generally they are fleshy, human sized bat-type creatures that feed on blood. There are higher vampires, which are a bit more similar to what we normally get but they’re extremely rare so we won’t get into that.

The Witcher is dark fantasy par exemplar. This is not fantasy for kids, it’s not black and white, good vs evil. Even the good characters have suspect motivations. For the most part it’s a world of moral ambiguity and shades of grey, so hopefully the show lives up to this. Judging by the shows Netflix have been producing recently, this shouldn’t be a problem.

In terms of dark fantasy on TV, Game of Thrones has set the bar crazy high. Netflix are undoubtedly aware of this and are aiming high with this series, however Game of Thrones is currently the most expensive TV show ever made, so, while Netflix may have deep pockets The Witcher isn’t likely to have quite as much high-end CGI and extravagantly huge filming sets.

Now if they get everything right, the characters, the action and the monsters, it shouldn’t matter and this could turn out to be a fantastic show well worth watching. It will be released with good timing, too. With Game of Thrones finishing next year and The Witcher being released the following year, it could be perfectly positioned to scoop up all those dark fantasy fans wandering aimlessly among the hinterlands of Netflix. For all those lost wandering souls, don’t stray too far. There’s plenty of other fantastic shows you can watch now.

For real authenticity and fan service the show will hopefully contain a scene in which Geralt plays Gwent, the wildly popular Witcher card game, featured in the novels, and playable in the games. So popular is this game that CD Projekt (the development company behind the Witcher video games) currently has a team working to bring out a fully-fledged standalone version of the card game to consoles and PC. 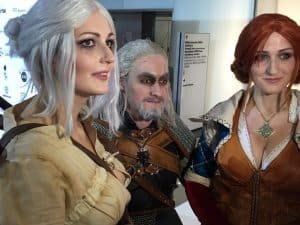 When can we expect it?

It has been confirmed that the first season will contain 8 episodes, more than likely over an hour each. Despite the last episode having been written and no specific release date having been announced, it has been suggested that the show won’t be coming to our screens until sometime in 2020. The characters joining Geralt will be familiar to fans, of the characters confirmed we have Yennefer, Ciri, Triss, Dandelion (referred to as his original name from the books, Jaskier) and Geralt’s trusty horse Roach.

Henry Cavill has been roundly accepted as a surprising but altogether good casting choice for Geralt, with showrunner Lauren Hissrich saying of Cavill’s audition, “I’ve never forgotten the passion he brought. He IS Geralt. He always has been”. If you want a sneak peek at what he may look like as the the White Wolf take a look at this fan-made image Cavill shared on his Instagram.

We’re excited for this show, all the more because so far it appears to be staying true to the source material. We’ve seen previous adaptations of the Witcher story, a 2001 film and a TV series the following year, both directed by Marek Brodzki. These were criticized by Witcher writer Andrez Sapkowski in a number of interviews, when asked about the screenplays for these adaptations Sapkowski said “I can answer only with a single word, an obscene, albeit a short one”.

All of this, as well as Sapkowski’s excited endorsement of the new series, are clues that this is sure to be a must-watch series.